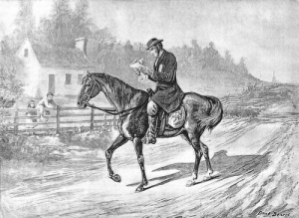 An image of the old-time Methodist circuit rider, a minister who would travel his “circuit” – often very long distances – on horseback to preach the good word.

In the Hastings, Ontario, Newspaper, 23rd November 1960, Mrs. Gerald Marrat wrote in an article, Pioneer Days in Hastings and District, that Methodists in Percy Township were visited by Circuit Rider, Rev. Anson Green, in 1824.

“The Rev. Anson Green, newly appointed to the Smith’s Creek Circuit preached to a small congregation at Percy Mills (Warkworth) led a small class meeting and was entertained by the father of the Rev. Solomon Waldron of the Canadian Conference, then stationed in Perth. The date was October 7th, 1824.

This circuit extended from Bowmanville to Carrying Place, the River Trent and Mud Lake. It contained 12 townships and 33 preaching places to be supplied once a month, and required 400 miles of traveling, 33 sermons had to be prepared and class meetings held, with prayer meetings as often as possible as well as a sermon at funerals.

Six months of this arduous work broke the health of young Anson Green and he was allowed a “two month rest.”

In a small booklet, Ontario 1784-1984, Life on the Farm, in an article on circuit riders, it states that, “It will come as no surprise that circuit riders seldom lasted at their positions for more than a year.”
54 LIFE AND TIMES OF ANSON GREEN, D.D. [1824. October 7, 1824
On Monday, preached at Sherwood’s, and on Tuesday at the Carrying Place. Called on the Rev. Mr. Greer, a young Episcopal clergyman, who had just settled in this village. Wednesday, rode round the head of the Bay to the Trent, thence over to Mr. Young’s (father to the Rev. Wm. Young), and preached from Proverbs 8:4. Wednesday, preached at Cold Creek to a few settlers, but no class. After a lonely ride to Percy Mills, I preached to a small congregation, led a small class, and was entertained by the father of the Rev. Solomon Waldron, of our Conference. Friday, rode back through the woods towards the front, and preached in the house of a local preacher by the name of Joshua Webster — an intelligent man and good company. Sunday, 10th Oct. at Haldimand and Grafton, preached on “What will it profit a man if he gain the whole world and lose his soul” A question, this, of infinite importance, but easily answered.